From my ‘selamba’ sister, Nick Izura: 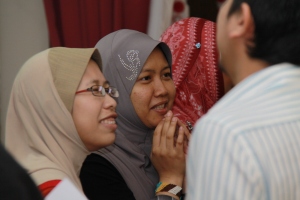 “Salam my dear Coach,
Hehehehe. Belum cerita dah sengih dulu. You know what, I notice since a few months back, Amer keep on saying “Coach Sha”. And I still remember, I asked him, who is Coach Sha? what is Coach Sha? And he point his finger …but I dont get the message.

I’m proud to be a banner!

Wednesday is our Taiping Trip.

The kids have grown up. The best thing is they grow up right in front of our eyes.

Muhammad is now nine (and I really thought he was 10 already!).

Musa is catching up in height, he’s turning 8 this November.

Maryam who will turn 6 has shown tremendous progress, alhamdulillah.  She’s been composing songs :).

Little Sarah, my December baby is reaching 3 this year.

After being loyal to FB all this while, I’m now back to blogging. I like niche readers!  We are in the same frequency 🙂

These past few months we’ve been approached by three concerned couples who are seriously considering homeschooling. Of course, the number 1 question is: Is this legal?

The way Ridz and I answer this question depends on the way it is being asked, who is asking and WHY the person is asking.

After numerous encounters with this issue, it’s time we put this in writing.

“Every child is born ‘fitrah’ or pure like a white cloth.  It is up to the parents to shape the child.”

When I think about why we choose to homeschool, one of the factors would be our education background.  Where Ridz and I attended school.

Yes, the more I think about it, the more obvious it becomes.

From Year 1 – Year 6, we attended the normal school system.  Learning the KBSR way.  School was fun back then.

However, for secondary education both of us experienced a different system from the mainstream.  The best thing is our background is really in contrast.

Ridz was sent (note the passive phrase – was sent-) to a religious school, or commonly known as sekolah pondok.  Those days sending your kids to religious institution became the last resort to reform your child.  Read:  to transform a naughty boy into a good one.

In this case, my significant other was once a notorious kid on the block..hahah NKOTB. His first pondok was literallly a pondok (hut) back in Pondok Lanai, Kedah.  He survived for 7 days only.  Imagine, at the age of 13 this boy had to buy his own fish and cook on his own.  Emm..shocking, eh?

So with one tearful phone call from a public phone booth 1km away, the parents took him home. Hold on, he did not live happily ever after because this is not a fairy tale, sister. On the same day, right after the parents fetched him from Pondok Lanai, they transported him to another pondok.  Madrasah al-Masriyyah in Bukit Mertajam.

Alhamdulillah…he’s now proud to say that he’s an alumni of al-Masriyyah.  The place is so dear to him that after we got married, on our honeymoon trip, Masriyyah was one of our stops.  (more on this later…the school not the honeymoon :))

I spent my teen years in a little town called College Station, nicely tucked in the state of Texas, US of A.  My mom pursued her PhD at the age of 40 plus and she brought us along. My high school was A&M Consolidated High – this is where I brushed up my English (Texan style) and enjoyed a different style of school system.  What a mind-opening experience!

I learned Spanish, tried out for the Track team, represented school for Duet Acting. From ESL (English as a Second Language) class, I upgraded myself to Honors Classes.

I found out that it’s OK to be different (considering I was the only one with a headcover in my high school!)

And best of all, I realize that life can still be fulfilling without SPM!

That’s right, I did not sit for SPM, nor PMR. (Oh, I did get 5As for my UPSR and top of the list for Sijil Darjah Enam in my sekolah agama). I can never work for the Malaysian government unless I choose to sit for SPM.  Thanks, but no thanks.  (Remind me to share an anecdote of my interview for KPLI).

So, against this background, Ridz and I have no qualms about choosing an alternative schooling system for the kids.  We are not the product of the Malaysian mainstream education and so far life is still blessed.  Alhamdulillah.

Hence, our approach to bringing up the four kiddos is a blend of both worlds – Ridz’s pondok plus Sha’s high school.

Having said this, our homeschooling style is unique to us and can’t suit other homeschoolers.  This is what H-S is all about.  It’s about parent’s power and empowering parents to choose what they want for their kids.  You decide what you want to achieve at the end of the day.

That’s why when people ask HOW we homeschool, we answer with WHY we homeschool. It’s the WHY that matters most.  The HOW comes next.

So, back to the question “Is it legal to homeschool?” look at it this way.  If it’s not legal then it’s illegal.  Meaning it’d be considered a crime.  I don’t know.  If we do not enroll our kids in the normal, mainstream system, would this make us criminals?

Hahahaha…sounds extreme, huh?  But joke aside, think about it for a moment.  You decide.

However, to answer some of the queries from fellow parents,  I’d like to quote a post from Mr. David BC Tan  of www.homeschoolhomefrontier.com:

(1) The Minister may, by order published in the education Gazette, prescribe primary education to be compulsory education. (2) Every parent who is a Malaysian citizen residing in Malaysia shall ensure that if his child has attained the age of six years on the first day of January of the current school year that child is enrolled as a pupil in a primary school in that year and remains a pupil in a primary school for the duration of the compulsory education. (3) The Minister may, if he considers it desirable and in the interest of the pupils or the public to do so, by order published in the Gazette, exempt any pupil or any class of pupils from the requirement to attend compulsory education, either absolutely or subject to such conditions as he may think fit to impose, and may at any time in his discretion revoke the exemption or revoke or alter or add to such conditions. (4) A parent who contravenes subsection (2) shall be guilty of an offence and shall, on conviction, be liable to a fine not exceeding five thousand ringgit or to imprisonment for a term not exceeding six months or to both. (5) The Minister may make regulations for the carrying into effect of the provisions of this section.

Note that compulsory education applies only to Primary School.  Secondary school is presently not mandatory under the above  Act. After Standard 6, Malaysian students are not compelled to be enrolled in a Secondary School and a child may choose to continue formal education in a private or public school, or abandon it altogether .

Subsequently in a written reply to a local daily in 2004, the Ministry of Education said the following factors would be considered in applications for exemption:

Conditional approval will be given once the minister is satisfied that the factors above have been met. The conditions include:

(Thank you Mr David BC Tan)

Enjoy the process of bringing up kids and becoming parents.

It’s a matter of CHOICE

This blog is about homeschooling. Our children (Muhammad, 14, Musa, 13, Maryam,11 and Sarah, 8) are exposed to learning & tarbiyyah at home, in the van, on the road. The world is their classroom. Their teachers are Abi & Umi, Tok Wan, Tok Wen, Opah, Sensei, their tutors and coaches, all the aunties and uncles in our big family, our friends and people from all walks of life. Alhamdulillah, a new roadschooler has arrived :) Khadeejah, 1.6 years.

We don't subscribe to a particular theory - what Islam has given us is simple and specific enough. Enjoy reading!